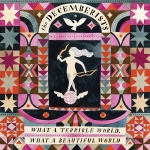 The Decemberists – What a Terrible World, What a Beautiful World
Indie Rock | Folk

Beneath the garish cover that makes most Christmas jumpers seem drab, you find a quiet, refined album of melodious folk music. The acoustic guitars and laidback drums are paired perfectly with keyboards, strings and layered backing vocals to give it a richer, fuller sound. In many places in reminds me of the lighter side of R.E.M. On “Lake Song” however, my personal highlight, it sounds like they are channelling Nick Drake. It has an old world feel to it, the fact that some of the lyrics are rather archaic certainly adds to the charm, even if I did need to look up the odd word. The album isn’t a one-trick-pony though, “Philomena” harks back to modest 50s Rock & Roll and “Cavalry Captain” sounds like a forgotten track from the heyday of 60s pop. It’s definitely more on the beautiful end of the spectrum rather than terrible, but the album feels a tad long and a bit tame. Listening to it I can’t help but feel like the band are playing it safe. It seems like a half hearted effort and I feel like there is a far greater album beneath the surface waiting to break free. Good ‘chill out’ music but nothing to get too excited about.