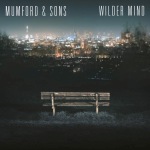 London based folk outfit Mumford & Sons have shocked the world by pulling a Bob Dylan and going electric. The banjos are long gone and have been replaced with guitar solos and mellow synthesizers. This is Mumford mark 2, and their gamble has paid off. ‘Wilder Mind’ isn’t a masterpiece, but it is the band’s most consistently good album to date. Despite having ditched the folk from their folk rock title, this album isn’t the Wilder offering that was promised. It’s a subtle, bittersweet affair. It’s a thoroughly likable album that will appeal to a wider audience but still keeps the sentiment and the vibe that made Mumford massive.

They’ve explored a new direction in a way that doesn’t alienate the fans of their earlier work – which is a very fine line to walk. They haven’t moved too far away from their roots (songs like ‘Just Smoke’ and ‘Only Love’ can easily be imagined as stripped down folk) but they seem to have found that right mix and have settled into their comfort zone. Wilder Mind is easily their best work and it’s certainly an important album. It’s rare these days for bands to successfully experiment with other genres, and it leaves me curious as to what other new directions they could pull off if they put the effort in.