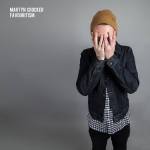 In Favouritism we find an album that perfectly treads the line between understated singer/songwriter and all out indie rock. You don’t need to get much further than the phenomenal opening track ‘Abacus’ to see exactly what I mean. From a simple acoustic intro it suddenly kicks up into a higher gear, complete with an anthemic chorus and some of the best damn bass riffs I’ve heard in ages. This winning formula continues with such standout tracks as ‘Out of the Dark’ and ‘Stick Around For Good’, flitting between folk troubadour and alt-rocker. By the end you realise that Martyn doesn’t tread the line so much as twirl effortless musical gymnastics around it. He has honed his sound to such a point that on this release it seems he can do no wrong.

Though the highlights are found amongst the more uptempo offerings, there is a lot to be said for the album’s folky moments. ‘The Places That We’re From’ provides great storytelling akin to Frank Turner, ‘If Only He Knew’ plays around with some interesting rhythms and the stripped back ‘Hold Your Hand’ ends the album with a dreamlike haze. If I were to really go through it with a fine tooth comb I’d say that the artwork was underwhelming and the vocals aren’t the strongest, but by all other counts Favouritism is an unmitigated success, right down to being about the perfect length. Full of hit songs that deserve to be in heavy rotation on playlists across the globe, I wouldn’t be surprised if one of them found it’s way into our list of best songs at the end of the year… only time will tell.