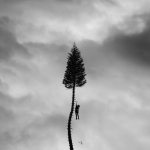 Manchester Orchestra – A Black Mile to the Surface

Discovering an amazing band for the first time is quite the experience. It’s like finding a gold coin in your back garden, imbuing you with a giddy thrill and an insatiable desire to dig deeper. Though Manchester Orchestra have been floating around the periphery of my mind for a while now, A Black Mile to the Surface is my first experience of them, and there’s very few albums that have immediately grabbed me the way that this has. ‘The Maze’ builds from its sparse folky opening to an uplifting choral climax, ‘The Gold’ stands out as one of the most anthemic tracks of the year, and ‘The Moth’ reminds me a little of some of The Dear Hunter’s darkest moments. ‘Lead, SD’ is the record’s dark horse, growing on you a little more with each listen. Its riffs are on edge and unsettling, punctuating the eerie calm like some monster in the woods toying with passers-by.

The record brings together personal reservations about fatherhood, alongside snippets of some half-discarded allegorical concept album. Though there are two different sides to Black Mile vying for your attention, it’s a wonderfully cohesive record with an effortless flow, most notably from ‘The Alien’, through ‘The Sunshine’, to ‘The Grocery’. For the most part the songwriting in the latter half of the record lacks the same attention grabbing appeal of the former, but it ends on an emotional high with the epic soundscape of ‘The Silence’ bringing to mind someone calling out to the world from some secluded and picturesque mountaintop. That same expansive, cinematic feel really defines the album and stays with you throughout. All great art should make you feel something and there’s no denying that Black Mile takes you on a journey, with every step worth your while.