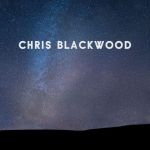 Though we are often told not to judge a book by its cover, we are all still guilty of it. Upon first glance the debut album by singer/songwriter Chris Blackwood, lacking a title, adorned with a somewhat plain cover and containing three instrumental interludes, may not seem like it is worth your time, but you would be doing both Chris and yourself a disservice. Whether you want a textbook indie hit like ‘The Writings on the Wall’, the curious fairground waltz of ‘Now You Know’, or the bittersweet album highlight ‘Passing By’ which recalls The Cure, there is something here worth discovering no matter what your tastes. Even those dreaded interludes turn out to be a real treat. Most acts that utilize them succeed in nothing but making their album worse, but here they tread new ground and really flesh out the record in rare and intriguing way.

There is stacks of potential here, but this is just a small first step on a long journey and there is a lot of room for growth. The record is a loose concept album, charting the course of life from birth to death, and everything in between. Much of this is lost on the listener and the album would really benefit from this ideas being developed further. Some of the more upbeat numbers could do with a bit more energy and gusto, but on the more somber and dramatic tracks like ‘Faraway’ Chris really plays to his strengths and pulls off creating a compelling atmosphere. This debut contains the basic elements of a great singer/songwriter,  and in its finest moments you can catch a glimpse of some blueprints for brilliance. It is still the early stages and Chris isn’t quite there just yet, but he’s one to keep your eye on.