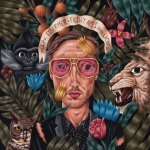 One great album in a year is more than enough for most people, but alongside Wonderful Wonderful The Killers’ bassist Mark Stoermer has also found the time to unleash his third solo record. These two albums couldn’t be much further removed from each other however. Filthy Apes and Lions is a psychedelic tour de force; vibrant, complex, and often bewildering. Musically it builds a world somewhat like the jungle depicted on the cover as it crafts a soundscape that is lush and plentiful, while also being dark and uneasy. ‘Racing in the Rain’ mixes White Album era Beatles with hints of ‘The Great Gig in the Sky’, ‘Nosferatu Blues’ conjures up an Eastern tinged Syd Barrett-esque style, while ‘The Perennial Legend of Dr. Mabuse’ carries an air of vaudevillian villainy, with Mark’s vocals reminiscent of Opeth’s Mikael Åkerfeldt. The album’s highlight however is the epic instrumental ‘Muju’s Revenge’; a sprawling 9 minute excursion through jazz fusion and trippy meanderings worthy of a Grateful Dead acid test.

There is a level of ambition, and indeed a level of skill, to pull it off so fantastically that has far exceeded my expectations. Lyrically the record deals with some bizarre and vivid imagery which is equally delightful and confounding, and sadly can sometimes be hard to follow. For such an adventurous and experimental release it’s surprisingly tight and consistent. The only real misstep is ‘People Take Pictures of Each Other’, whose quirky and upbeat simplicity sounds awfully out of place, especially following on from the album’s main expansive epic. Kaleidoscopic prog song structures aren’t something one would ever associate with The Killers, which actually makes this album all the more exciting. This trippy and intoxicating rock opera will keep drawing you back to explore the many mysteries to be found within.