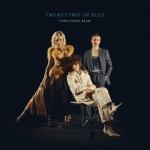 Credit where credit is due: Sunflower Bean has come far. The Brooklyn classic rock trio, consisting of the obliviously cool, tousled-blonde Julia Cumming; Nick Kivlen, who appears to be Bob Dylan reincarnate; and Jacob Faber, the one with the unabashedly 70s facial hair, have released their second album, Twentytwo in Blue, making the first bold shift away from the compilation of songs they’d written for its predecessor, Human Ceremony, when they were just teenagers, towards an intended newfound sophistication. One might expect a sharp learning curve following their previous critical acclaim, but they seem to have melted seamlessly from the shoegaze sensibilities of Human Ceremony, to a nostalgic, dewy-eyed classic rock that some may call “mature” – however, in this case, I feel the word “boring” might be more fitting.

Twentytwo in Blue, despite its best efforts to exude an air of artful endearment, instead smacks of unoriginality. They play it safe. For a band who is often married to the alternative, here, remarkably, they seem to neatly place themselves in a box. To listen to Twentytwo in Blue feels as if you are cheating on someone, because all the time you are listening to them, you’re thinking of someone else in your head. All the time, track by track, my mind flitted back to Fleetwood Mac; Julia Cumming’s wistful, light voice seemed to meld into Stevie Nicks’. The divide between them is flimsy and limpid. Cumming’s voice is fundamentally good, and on the previous album seemed to fit beautifully with its post-punk revival sound, but here any distinct edge it may have had has withered away for the sake of emulation.

Regardless of my criticism, I don’t want to create the impression that there are not songs on this album that give it integrity. I feel that what Sunflower Bean do incredibly well on this album is the song ‘Human For’: its unapologetic edge, relative vigour and verve, with a commanding and captivating instrumental, gives an otherwise repetitive album some diversity. ‘Puppet Strings’ has a similar effect, with such a hard-hitting effervescence it provides a much-needed injection of life and flavour. The duet makes it far richer; the male and female vocals, though fundamentally contrasting, compliment each other. Personal taste though it may be, I hope their future work will reflect these songs and far less so the work of others. This is by no means a bad album, but I am desirous for something memorable, something far more unique, that I feel Sunflower Bean are undeniably capable of attaining.