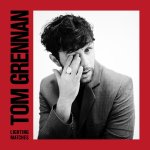 Over the past year, Tom Grennan’s distinctive sound has been inescapable – more than that, it has been unmistakable. His debut album, ‘Lighting Matches’ is a rarity of an album in that every track carries its own significance. As you immerse yourself in each song, it will take you aback with just how much of Grennan’s work you’re already well-acquainted with. Despite being a mainstream favourite, whom the radio has lavished stretches of airplay on for the bulk of ‘Lighting Matches’, it doesn’t decrease the impact that each track holds. Grennan, with his soulful growling and lashings of brass sections conjures the passion and seediness of New Orleans, yet he is markedly English-sounding when it comes to his swooping acoustic songs. He is a wonderful hybrid, and perhaps that’s where his allure lies.

The street-smart snarl of ‘Found What I’ve Been Looking For’ and ‘Sober’ gives the album a saloon-style swagger, while the likes of ‘Abroad’ is dripping in cabaret glamour. ‘Lighting Matches’ has, at times, cinematic prestige: it’s at these times Grennan is in his element. In saying that, its in his more poignant songs, such as ‘I Might’, that his skill as a songwriter enters the forefront: “Don’t want no one messing up my bed / Fucking with my head, it’s no lie / But when you look at me like that / I might”. His lyrics rarely possess the airs and graces of other songwriters, but that, blended with his unpolished voice, is that gives Tom Grennan his charm. However, many of his songs, such as ‘Little By Little Love’ are dangerously middle-of-the-road, were it not for his vocals that set him apart; the quality of the songs themselves are often unremarkable, but his voice makes them feel like something new and unheard of.

Ultimately, this album can’t fail to be of merit when you could easily listen from beginning to end without interruption. It has glimpses of true brilliance, but Grennan’s craft still needs honing to keep momentum. It has a tendency to fall into lulls between the hard-hitting tracks. Nevertheless, Tom Grennan is an undeniable talent who is only just beginning.