Rock legend David Bowie has revealed details about his upcoming 25th studio album ‘Blackstar’. Due to be released on 8th January (his 69th birthday) it contains 7 tracks and is full of jazz influences as well as “Gregorian chants, a soul section, various electronic beats and bleeps, and Bowie’s distinctive vocal”. The ten minute long title track is to be released on 19th November as the lead single. The album is unlikely to be supported by a tour as Bowie has stated that he has retired from touring.

A concept album that tells the tale of Bowie’s greatest musical alter ego; a bisexual alien rock superstar that is here to present mankind with a message of hope. The story is rather vague but you don’t need to follow it to enjoy some of Bowie’s biggest hits, such as ‘Starman’, ‘Moonage Daydream’ and the title track ‘Ziggy Stardust’.

Elton’s finest work and one of the best double albums ever produced. The wonderful lyrics by Bernie Taupin come together with the music to craft magical imagery to tell various tales of larger than life figures; be they cowboys, gangsters, glam rock stars or real life icons such as the Marilyn Monroe tribute ‘Candle in the Wind’. Most double albums cannot maintain good quality music consistently throughout, but here it seems effortless and there is never a dull moment.

Pink Floyd – The Dark Side of the Moon

One of those most iconic images in the history of music, and one of the finest concept albums ever produced. Rogers Water’s lyrics cover themes such as life and death, conflict, greed, mental illness and the passage of time. It was produced using some of the most advanced recording techniques of the time and even today there is nothing that quite matches it’s unique sound. It’s no wonder that it spend around 14 years in the album charts, a feat that has never come close to being matched. 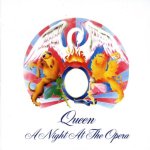 Queen – A Night at the Opera

At the time it was the most expensive album ever produced, and it’s worth every penny. The album is summed up in it’s pinnacle, ‘Bohemian Rhapsody’. There’s tender moments of heartache, frenzied moments of anger, a fair bit of lunacy and a whole heap of fun. Each member pulls his weight and makes valuable contributions towards making this Queen’s best album.

This band has a rather mixed parentage but I certainly believe that it holds a British passport first and foremost. Music is about passion, It’s about putting your emotion into the songs and having other people feel that way when they listen. Rumours was written with nothing but passion of one form or another. The band members at the time were falling in and out of love, experiencing joy and sorrow in equal measures and you can feel it in every song

Saw Belwood favourites @thankyouscientist live in Manchester at the weekend and discovered my new favourite venue @satanshollow in the process 🙌 Live review up on the site now!
Here's a late Valentine's gift for you: the first of our new bi-monthly playlists. It features all the music covered on the site in the past two months, along with some other gems that we sadly didn't get chance to write about. Enjoy! #playlist #spotify #newmusic #winter
What a perfect gig to start the year with, the incredible @megdixonhood ✨ great support from @secludedseaband and @lissytayloruk too! Our live review is on the site now, and the full gallery is up on Facebook. @scruffoftheneck_live @gulliversnq #livemusic #manchester #northernquarter #musicphotography #megandixonhood #newmusic #risingstar
The news of Neil Peart's passing has hit me like a brick wall. Rush are my all time favourite band and their music is a big part of who I am. I remember hearing '2112' in it's entirety for the first time and having my eyes opened by the revelation of just how epic music could be. I remember seeing the band live on their final visit to the UK. I was close enough to feel the heat of the pyrotechnics. It was my first gig and still remains one of the very best. I've known countless long nights where I could barely hold it together and the greatest solace and comfort I could find to make sure I saw the morning were Neil's lyrics on 'The Pass'. RIP Neil, you'll be sorely missed. #Rush #neilpeart
Best albums of the decade! I realise no one else cares about this list anywhere near as much as I do, but I'm proud of it all the same. It was hard work, harder than expected, but it was a joy to revisit some albums I've not properly listened to in a long time. Like catching up with an old friend! Will hopefully follow up with a song list fairly soon, but for now it's time for a well earned rest! #music #album #blog #bestofthedecade #2010s #article
As well as being the last day of the decade, today also happens to be Belwood's 5th birthday. There's a lot to be proud of and thankful for as we look back over the past few years. From humble beginnings in a cold uni flat, to sharing thousands of songs with tens of thousands of people is just staggering. We've had the chance to interview some of our favourite acts, and discovered new artists that we've fallen head over heels for and have had the pleasure of sharing with the world. We've put on two incredible gigs, filmed fun live sessions, been in the photo pit at the main stage of a festival, and met some incredible people along the way. There's not enough room to thank everyone, but special shout out to Dom from @soundspheremag , @lostinthemanor_chris and everyone at @cafe_indie for their help and support. All the love in the world to all the patient and hardworking PR people, the inspiring and talented artists making such brilliant music, and everyone who's checked out and supported the site. Here's to many more years to come 🥂 #newyearseve #thankful #fifthbirthday #music #blog #happynewyear #musicphotography #concertphotography