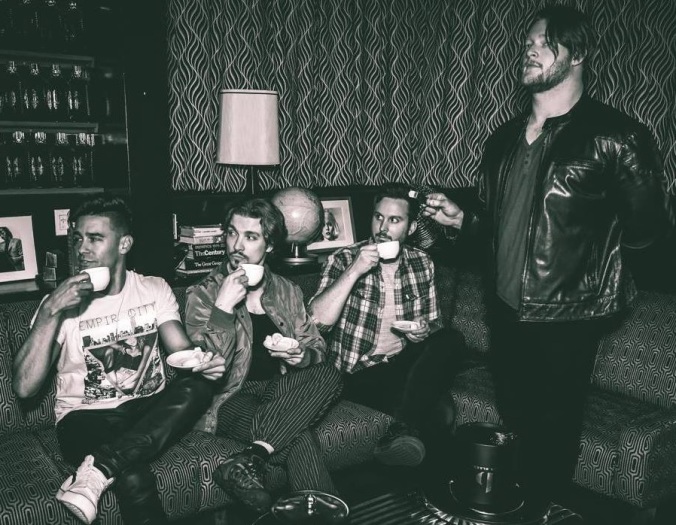 Though they probably have the least rock’n’roll origin story that I’ve ever heard, having all met via Craigslist, this LA based quartet prove that great music can come from the most humble of origins. With their latest EP Dichotomy, Midnight Divide prove to be a multifaceted marvel dabbling in a diverse range of influences. The mellow intro of ‘Fireline’ has the feel of some children’s music box before building into a fantastic melody driven hit. ‘Animal Eyes’ sees the band following a harder alt rock path, with frontman Austen Moret’s vocals in places reminding me of Franklin James Fisher from Belwood favourites Algiers. ‘Talking’ is a classic cut of bright indie rock, while the restless ‘Ketamine’ begins with a short section reminiscent of ‘Hocus Pocus’ by Focus, and displays some curious reggae influences in the latter half. while somehow linking it all together seamlessly. Any band that aims to blur the lines between genres with such reckless abandon gets a big tick in my book. With songs of this standard Midnight Divide have my utmost respect and my undivided attention, and I recommend you offer them the same.

Fans of Algiers, Everything Everything, Amber Run and Yeasayer should check out their new EP Dichotomy.

The news of Neil Peart's passing has hit me like a brick wall. Rush are my all time favourite band and their music is a big part of who I am. I remember hearing '2112' in it's entirety for the first time and having my eyes opened by the revelation of just how epic music could be. I remember seeing the band live on their final visit to the UK. I was close enough to feel the heat of the pyrotechnics. It was my first gig and still remains one of the very best. I've known countless long nights where I could barely hold it together and the greatest solace and comfort I could find to make sure I saw the morning were Neil's lyrics on 'The Pass'. RIP Neil, you'll be sorely missed. #Rush #neilpeart
Best albums of the decade! I realise no one else cares about this list anywhere near as much as I do, but I'm proud of it all the same. It was hard work, harder than expected, but it was a joy to revisit some albums I've not properly listened to in a long time. Like catching up with an old friend! Will hopefully follow up with a song list fairly soon, but for now it's time for a well earned rest! #music #album #blog #bestofthedecade #2010s #article
As well as being the last day of the decade, today also happens to be Belwood's 5th birthday. There's a lot to be proud of and thankful for as we look back over the past few years. From humble beginnings in a cold uni flat, to sharing thousands of songs with tens of thousands of people is just staggering. We've had the chance to interview some of our favourite acts, and discovered new artists that we've fallen head over heels for and have had the pleasure of sharing with the world. We've put on two incredible gigs, filmed fun live sessions, been in the photo pit at the main stage of a festival, and met some incredible people along the way. There's not enough room to thank everyone, but special shout out to Dom from @soundspheremag , @lostinthemanor_chris and everyone at @cafe_indie for their help and support. All the love in the world to all the patient and hardworking PR people, the inspiring and talented artists making such brilliant music, and everyone who's checked out and supported the site. Here's to many more years to come 🥂 #newyearseve #thankful #fifthbirthday #music #blog #happynewyear #musicphotography #concertphotography
Last gig of the year - of the decade in fact - with @patawawa @kashmereband and @fidelityfreakband at @wetrecords Christmas party. Fingers crossed 2020 has many great nights just like it in store. #cafeindie #cafeindiependent #scunthorpe #livemusic #musicphotography #indie #christmas
Incredible night seeing @thenational in Leeds last night. Review on the way soon, so keep an eye out on the blog! #thenational #leeds #firstdirectarena #iameasytofind #yorkshire #livemusic #musicphotography
Not the best photos, but definitely the best of nights ♥️ thank you to all the wonderful people that came to Belwood's 5th birthday party at the weekend - to the artists that played such gorgeous sets and the crowd of lovely people who listened so attentively on the night and have shown their support all the way. Much love to you all 🙏 💕 #livemusic #gigphotography #cafeindie #scunthorpe #acoustic