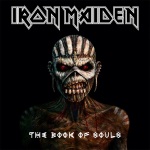 Iron Maiden – The Book of Souls

I’m a big Maiden fan, but I held little hope for Book of Souls. Frontman Bruce Dickinson had cancer, the band was releasing their first double album when most ordinary albums are full of filler, the album had little publicity and even the artwork looked rather lacklustre (by Iron Maiden standards anyway). I’m amazed by what the band have produced. It’s hardly a perfect album but it’s their best album since ‘Brave New World’ and it has completely exceeded my expectations.

This is the band at their most experimental and excessive. Everything is bigger; the riffs, the atmosphere, there are even hints of piano and flamenco guitar. There are plenty of memorable songs including the furious single ‘Speed of Light’ and ‘Tears of a Clown’ which is inspired and dedicated to Robin Williams. The two standout tracks though are those written by Bruce Dickinson: ‘If Eternity Should Fail’ and ‘Empire of the Clouds’. The latter surpasses ‘Rime of the Ancient Mariner’ as the band’s longest song. It’s about a fatal airship crash and is told in Maiden’s unparalleled storytelling style, sitting proudly as the band’s new magnum opus. Up the Irons!