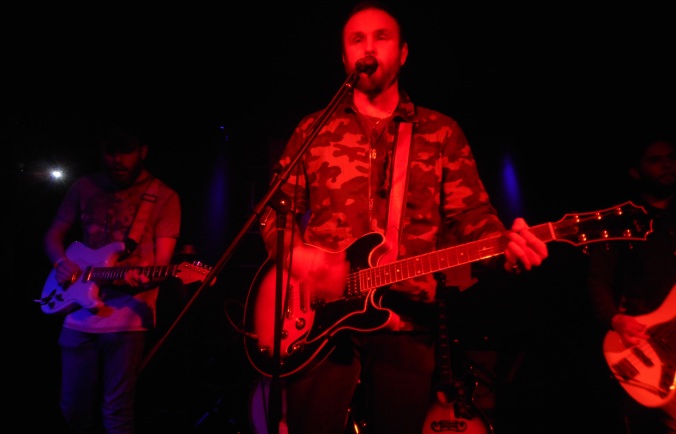 Belwood Music has found plenty of new favourites over the past couple of years. One act that has certainly earned a place in our hall of fame is former Bottleman Billy Bibby and his new band The Wry Smiles. Post-Catfish he has maintained his high standard of songwriting and has made an assured and promising start to his solo career. Billy was our first ever interviewee and his track ‘Are You Ready?’ found its way into our top ten songs of the year. All that has been missing was the chance to see the lads in action up on stage. I caught up with them at The Leopard to see if they could keep up their high standard for the eager Yorkshire crowd.

I know full well that us northerners can be a bunch of skinflints, but even I was surprised at just how much great music you got for your money, with four support acts! Tom Jane provided some breakneck acoustic blues, with great use of effects pedals to add some variety to his sound. Mint lived up to their name; their punk energy and hazy, dream pop soundscapes certainly made for a cool and refreshing set. Paisley Sundae served up some upbeat and danceable indie pop, with hints of some inexplicable old-school vibe. Local band The Resistance undoubtedly looked the part, and played a great mix of covers and original compositions, but the vocals and guitar were far too low in the mix to really get a full measure of them.

When it came time for the main event, Billy and the boys pulled out all the stops for the intimate audience. Their finely crafted indie anthems such as ‘Waitin’ For You’ and ‘Don’t Fall’ were slick and precise, spot on with the studio versions. ‘Believe Me’ brought out their acoustic side and made for a great change of pace, even more so after the band had road tested some new songs that strayed slightly closer to heavier, alternative territory. Their latest single ‘Substitute’ in particular took on new life in a live setting, with a real hard edge and foot stomping beat. It’s clear that the lads have their eyes on a few differing directions that they want to pursue, but every move they make is steady and deliberate so as not to stray too far from the winning hit formula that has spawned so many superb melodies and infectious choruses.

It’s clear that the move to pursue a solo career has done nothing to scupper Billy’s songwriting. Here is a man who leaves a cloud of indie hits in his wake, like blossom petals on the breeze. But that doesn’t take away from the immensely talented Wry Smiles, who perform each track like a well oiled machine, albeit with a warm and honest sense of camaraderie. They give a very clear impression that they love what they do, and it’s these kind of endearing, tight-knit friendships that inspire an easy-going rapport with the audience. This is a band that doesn’t take themselves too seriously, they just want to share their music and have a good time, and it made for a real laid-back and welcoming atmosphere on the night. With that love for each other and their fans, and with a few more hit singles to their name, it won’t be long until Billy and The Wry Smiles become big players in the indie scene… so see them at these small, cosy gigs while you still have the chance.