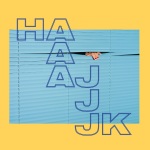 Every so often a band comes along and just completely blindsides you by being so much better than they have any right to be. That was the reaction I had upon first hearing ‘Best Friend’ from Oslo outfit Hajk. It was the kind of song you could listen to for hours on end and never get bored. Though the track remains the highlight of this Norwegian band’s self-assured debut, there are still plenty of superb moments to reassure listeners that they have a lot more to offer. ‘Flowerdust’ has hints of Feist, the bright folk of ‘Medicine’ is reminiscent of First Aid Kit and ‘My Enemy’ blends together some of the albums’ best vocal harmonies with some fuzzy guitar work and killer hooks. Granted there are plenty of times here where the band fail to grab your attention, but when they do, their masterful melodies are of a different class altogether.

Combining modern indie folk with 70s/80s AOR, and with the fantastic interplay between Preben Sælid Andersen and Sigrid Aase’s vocals as the icing on the cake, Hajk have their own signature sound and a clear idea of the band they want to be. I can’t help but think of them in the same vein as Fleetwood Mac, not only musically but also in that they in places share an indescribable universal appeal. You play some classic Fleetwood Mac to anyone, anywhere, and odds are they will love it. Hajk have a long way still to go to match that, but they have hit upon something very special. Though their debut has a few missed opportunities and filler tracks, they have the capability to create songs that would be beloved by all. This is some of the best music I’ve heard from mainland Europe in a long time and if they can perfect that hit formula then the sky is the limit.