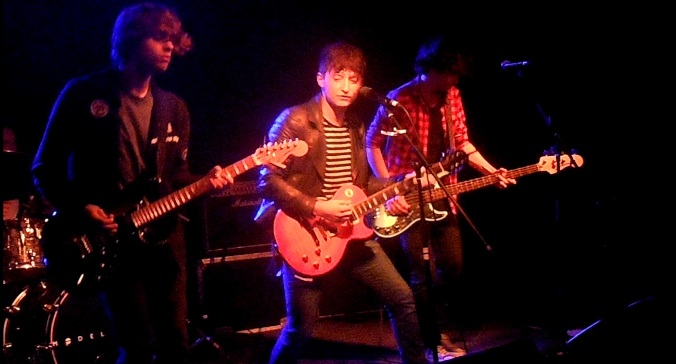 We all have our own little habits and rituals, but every now and then we need to break free of them, and take a chance in the hopes that life catches you off-guard. You can’t be pleasantly surprised unless you first take a plunge into the unknown. The same mantra applies well to music, as I found upon returning to the quirky Cafe Indie. With three bands on the bill, I went in knowing next to nothing about any of them, and left as a new fan of all three. It seems like small bands and smalls gigs can offer the biggest surprises, and it’s no exaggeration to say that the night exceeded my expectations in every sense.

Up first were fiery three-piece Finno, and despite having just a couple of gigs under their belt as a band, you certainly wouldn’t have guessed so watching them. With hints of The Pixies and Wolf Alice, and with some thought-provoking lyricism and heartfelt purpose, this young trio were more cool and collected than many more experienced bands that I’ve seen. Striking the right balance between brooding and spirited, breaking you down with the darker moments only to build you up again with their electrifying energy, they displayed a world of potential. Granted their set was a little rough around the edges, but with a bit of work they could be a real force to be reckoned with very soon.

Local legends Model Life on the other hand were as slick and polished as they come as they continued their month long residency at the cafe. Their more synth heavy moments were reminiscent of Blossoms, while their charismatic frontman’s onstage antics were textbook Jarvis Cocker; somehow endearingly awkward and effortlessly cool at the same time. ‘Sugar’ ended up being the highlight of their set, with some fantastic drum fills that proved to be some of the most memorable musicianship of the night. The band was sheer class. Composed and professional as though they have been gigging their whole lives, these lads are thoroughly deserving of a big break in the near future.

Though the crowd had sadly thinned out a little by the time The RPMs took to the stage, that didn’t stop the Brighton band from giving their all. They had an easy-going rapport with the audience and there was a real sense that they loved every minute. When a band are out to have a good time that sensation is contagious, and they soon had everyone grooving along to their feelgood tunes. Their music had a cinematic feel, like the soundtrack to some happy Hollywood montage showing carefree days under some golden sunset. Recalling everyone from the Spin Doctors to The Jam, their set was a shot of pure concentrated joy. I wholeheartedly recommend them if you want a shamelessly fun indie band to help you forget about life for a while.

Each set brought a smile to my face, and each for different reasons. Each band deserved to be playing to bigger crowds and have a buzz around each mention of their name, but for my own selfish reasons I’m glad I saw them in a laidback, intimate setting. I find my sense of pride in my local scene growing with each new chance I take, and each new band that subsequently surprises me. After discovering three new bands that all put many of the current landfill indie acts to shame, I felt on top of the world. As fortune smiles on me I’m left wondering what the next chance I take might bring me. Whatever it is, it sure has a lot to live up to.

Only a few hours to go until we can finally put 2020 behind us. I'm sure no one will be sad to see the back of it, but if this absurd and challenging year has taught us anything it's to make the most of the little things in life. Like all the wonderful music that offered a lifeline when things got dark. If you've been moved by any of the acts covered on the blog this year, I urge you to support their work in whatever way you can.
In case you missed it, we started doing Spotify playlists this year. Been keeping them updated with all of the music covered on the site in 2020, as well as a few forgotten gems that we sadly didn't get around to covering. A bit of something for everyone, so well worth checking out... not that we're biased or anything! #playlist #spotify #spotifyplaylist #newmusic #2020music
List season is soon upon us! Here's what you have to look forward to before we finally put this crazy year behind us #awards #newmusic #bestoftheyear #bestalbums #bestsongs
If the UK government continue down their current path of gross negligence and dereliction of duty, then our world renowned live events industry will be lost forever. Today we're joining friends and colleagues across the industry who have fallen through the cracks to call upon the government to provide targeted financial support. The only way we can keep the industry alive is with your help, so please make your voices heard using the hashtag #WeMakeEvents
2019: gigs, festivals, meeting wonderful artists
Would have been at my favourite place in the world right now were it not for everything that's going on 🥺 really missing @barnonthefarm something fierce, especially considering how 2019 was the best year yet (and that's saying something!) Hurts to be stuck at home right now, but that will only make being reunited with the farm family next year all the sweeter ❤️ #summer #festival #barnonthefarm #music #missingyou #throwback
Loading Comments...
Comment
×
%d bloggers like this: