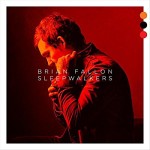 2017 proved to be a great year for solo artists striking out and trying new things, some of which even proved to be better than their respective bands, but this new release from The Gaslight Anthem’s frontman seems to have broken that trend. Sleepwalkers for the most part lives up to it’s name as it seems to operate on autopilot. It just feels like a selection of off-cuts from Brian Fallon’s Gaslight days, a bunch of forgotten tracks that have no rhyme or reason in being gathered together. There’s definitely some special ingredient that’s missing, some absent drive that is needed to push the songs to the next level. There’s nothing here that lives up to Gaslight at its prime, yet at the same time there’s nothing all that discernibly different to make this stand out as a solo record.

Let us not forget however that Fallon is one one of the most underrated songwriters on the circuit, so even on his off days there is still plenty of charm to be found. The warm brass on the title track is textbook E Street Band, while the mandolin lead ‘Proof Of Life’ weaves some of Brian’s most romantic lyricism yet in the chorus. His love letters to the UK, ‘Her Majesty’s Service’ and ‘Watson’, are full of odes to British culture and simply ooze charisma, despite sounding a little odd coming from an artist so intrinsically American. The occasional flashes of brilliance aren’t quite enough however to warrant too many repeat listens. Sadly this is just one to tide over super-fans and completionists while they await the next proper Gaslight Anthem record.