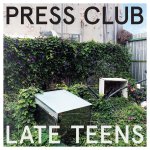 I can probably count on one hand the number of punk releases that I genuinely enjoy. Part of that is down to me growing up on prog, the complete antithesis of punk, but even looking past that there are some very real flaws that keep cropping up time and time again. Things likes bands letting the music get away from them and descend into chaos, or a half-hearted attempt at making a political statement which comes across as inarticulate and insincere.

Aussie punks Press Club don’t just avoid these pitfalls, they sprint clear over them as though they were never even there. Their debut album Late Teens has all the indefatigable enthusiasm you could ask for, but the musicianship on display here (particularly the drums) completely subverts my expectations. Whenever you feel like they must be close to breaking point, they kick it up a notch while still keeping everything tight.

There’s always a place for big ideas about the wider world in music, but they can be hard to put across effectively. Mainly because in real life, particularly when you’re young, you’re not trying to understand the world, you’re trying to understand yourself. Most people aren’t looking to change the world, just roll with the punches. Late Teens takes this approach and is all the better for it. The raw, frantic passion feels meaningful and justified; a release of feelings long bottled up within, rather than just calling out to the void.

In a way it reminds me of Catfish and the Bottlemen’s debut; not in style, but in approach. An album full of heartfelt anthems, no filler to be found, each track stands tall by its own merit. Even ‘Side B’, a brief instrumental interlude the kind of which would be pointless on most albums, feels like it has something to say. The vocals falter slightly on ‘Crash’ and the title track, but the rest of the record is packed to the brim with bangers like ‘Headwreck’ and ‘Suburbia’ that just make your heart soar and electricity dance along your veins. There must be some small part of me that’s a punk fan deep down, as I simply adore this record.