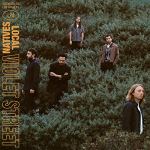 I’m a big fan of what Violet Street tries to be. It brings that textbook Local Natives sound to the table, their bittersweet and cinematic take on the harmony drenched California scene, but offers an updated take on it. The rhythm section are at their very best on this record, throwing out effortlessly cool R&B grooves like it was nothing. The vibrant ‘Megaton Mile’ dabbles in psychedlica and is reminiscent of Currents era Tame Impala, while ‘Cafe Amarillo’ opts for a more classic, chilled-out approach with its slow burning groove. The band’s soulful side is a bit more subtle on album highlight ‘When Am I Gonna Lose You’, more present in its hooks than its instrumentation, but it still feels as though it takes them at their best and manages to just sprinkle a little something extra on top to sweeten the deal.

There are a lot of standout moments within the first few tracks, but as you delve into the second half of this very top heavy record you start to see the cracks. The electronic elements and overproduction of ‘Gulf Shores’, and the cacophonous big band climax of ‘Shy’, both feel very out of place. These issues are easy enough to look past, less so the issues surrounding the stretch of tracks at the centre of the record. Often the songs flow together using an instrumental breakdown that ends one track and begins the next; perfectly fine on paper, but the transition sections are often so jarringly different from the song that comes before/after it that it defeats the point entirely. The few kinks in this record certainly aren’t enough to overshadow the brilliant highlights, but unfortunately they are enough to make you think twice about listening to Violet Street as a whole, and instead just pick out the best of the bunch.