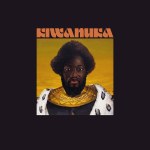 An eponymous album exists to make a statement. Generally they’re reserved for debuts as a way of getting your name out there, announcing to the world: “here I am, this is me”. It’s far rarer for acts to release eponymous records further down the line. When they do it is used to signify a turning point of some point; a line-up change or drastic shift in sound like with Fleetwood Mac’s 1975 self-titled record. For an established act like Michael Kiwanuka, who garnered well deserved acclaim for his stunning second record Love & Hate, to then release an eponymous album brings with it an expectation that his new release would be something different, something special.

Upon first listen it really doesn’t feel that way. While Love & Hate grabbed your attention straight away with its contemporary spin on soul, the old school style of this latest record feels stale. That’s certainly not a criticism of classic soul, that’s where you can find some of the greatest music ever put to wax, it’s more a criticism of Michael retreating to the familiar rather than pushing forwards. Just replicating a record from the 70s without imbuing enough of his own personality into it. It’s a soul album without any actual soul. I’m sat here listening to music which is undeniably beautiful expecting to feel something, and yet I find myself completely unmoved.

On paper I should like this album. I want to like it. Closing track ‘Light’ has the same dreamy quality of ‘Cold Little Heart’, ‘Hero’ has some great fuzzy guitar riffs, and the album as a whole is full of gorgeous orchestration. It ticks all the right boxes and yet somehow still feels like it is just going through the motions. There’s just a spark missing.  Its a very pretty record by every measure, but not an interesting one. The harder I try to get the album to click, the further it drifts into the background.