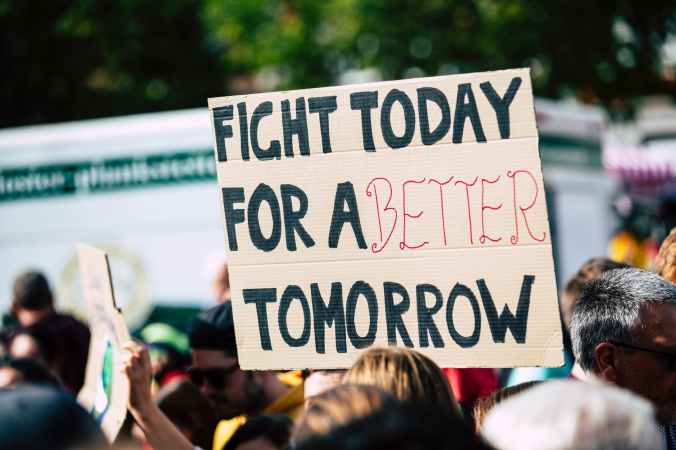 Photo by Markus Spiske on Pexels.com

Music has a lot of power over us. It can bring us to tears, help us fall in love, comfort us when we’re at the end of our rope, and make us feel like we’re on top of the world. Though we all connect with music on a personal level, in the wider scheme it can also bring people together and unite them behind a common cause. In these ways a song can become the voice of a generation, a call to arms against injustice, an inspirational voice for positive change. There’s certainly no shortage of causes for artists to rally around, especially given the current state of the world. We have the abhorrent rise of far-right ideologies, the ever growing division caused by racism and xenophobia, the worst wealth inequality the world has ever seen with the richest getting richer and the poor dying needlessly, and of course the looming threat of an ongoing climate crisis. There’s enough ammunition there to spark a golden age of protest music… so why does it feel like protest music has lost its bite?

Obviously there are still artists out there fighting the good fight (and one would hope there always will be). The past couple of years have seen Stormzy and Dave call out the appalling records of two successive prime ministers at the BRIT awards, and Childish Gambino’s instantly iconic video for ‘This Is America’ took the world by storm and will be talked about for years to come. We’ve had scathing punk from IDLES, droll satire from Father John Misty, and even a heartfelt and unflinching plea for compassion from The Killers. There are certainly instances of great protest music to be found, but it’s not as prevalent as it should be, nor does it seem to be resonating the same way it did in past generations.

The key factor behind the lower frequency of protest music is down to the way that the music industry itself has changed. The old days of artists getting a record deal, getting paid an advance to make an album, and then making a minting if said album sells well doesn’t really exist anymore. At the very least it’s far rarer; all the money is at the top and very little of it trickles down to smaller artists. These days it is far more common to find artists cutting out the middle man and self releasing as it has never been easier for artists to do all the recording and promotion themselves. Good job too, as it’s usually the only way they can afford to carry on.

Many artists are essentially working three jobs: making music, sorting out all the admin that comes with releasing and promoting music, and a day job to pay rent and put food on the table. A lot of acts we may think of as famous and successful have only just built up a big enough following to make their music career self-sustainable. This is all down to the advent of streaming as our main way of consuming music. An artist has to get thousands of streams just to make the same money they would get from selling one physical copy. In the end this means that artists literally can’t afford to make a statement anymore if they want to make ends meet. Back in the day you could release a politically charged record and it almost didn’t matter whether it resonated with people or not as they had already bought the album at that point. These days artists need to have people constantly streaming their music, and so understandably the risk of alienating part of their audience is a big financial risk that many aren’t willing or able to take.

Audiences aren’t as receptive to music that gets behind a worthy cause as they used to be, there’s been a shift in public perception in recent years. The narrative these days is that politics is for politicians and musicians should “stick to music”. This is, of course, absolute bollocks. It’s mindless nonsense that is spouted ad nauseam by the kind of knuckle-dragging fuckwits who are spurred into a nationalistic frenzy whenever they hear ‘Born In The USA’ as they haven’t paid a modicum of attention to the actual lyrics. We live in a democracy, which means everyone has an equal voice, and change doesn’t happen unless we exercise our right to voice concerns.

Apathy has a big part to play in how people’s eyes just seem the glaze over when politics is mentioned. The general public has a very limited understanding of political processes and what people actually stand for, and often the public is so used to empty promises from self-serving politicians that they wouldn’t recognise sincerity if it knelt in front of them with a bouquet of roses. Those that benefit from the status quo have a vested interest to keep people sceptical and poorly educated. There’s also the added barrier of anti-intellectualism when supporting environmental causes that has seen a spike in recent years. Even though a lot of the advice we get given to help save the planet would often mean we have nothing to lose and everything to gain, people won’t comply as they are just too stubborn to listen to experts. The virulent spread of misinformation and apathy via the internet is something that past generations haven’t had to deal with, and something modern protest music is still in the process of trying to battle and overcome, with mixed results at best.

Anyone who hasn’t spent their whole existence with their fingers in their ears will know that music and politics have always been closely linked. You can look all the way back to the early folk of Pete Seeger and Woody Guthrie, with his iconic guitar emblazoned with the words: “this machine kills fascists”. We had a golden age of music in the 60s that revolved around fighting for important causes, a decade that saw Bob Dylan’s ‘Masters of War’ and Sam Cooke’s ‘A Change is Gonna Come’ among countless others. The early 70s saw Marvin Gaye’s seminal record What’s Going On, as relevant now as it was back then, and Joni Mitchell’s environmentalist anthem ‘Big Yellow Taxi’ sticking up for the planet decades before the words “climate change” entered the vernacular. ’77 alone saw both the Sex Pistols’ Never Mind The Bollocks and Pink Floyd’s Animals – both fighting the same cause from opposite ends of the stylistic spectrum. We can chart a path through punk and rap, past Patti Smith and U2, skirting round Billy Bragg, Rage, and the Manics, via the Dixie Chicks and Radiohead all the way to this moment.

Protest music has always been here, and looking back it has always been on the right side of history. It has had the power to touch hearts and minds and change the world for the better many times before, and it can do so again. All we need is a few more brave artists willing to speak out and a few more open minded people willing to listen. It might not seem like much, but all revolutions have to start somewhere.