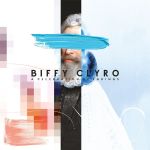 Biffy Clyro – A Celebration Of Endings

When you take a step back and look at their discography, Biffy’s artistic trajectory is a story all about balance. For their early records, quirky balls-to-the-wall math rock was the order of the day, and the odd great chorus you would stumble upon was more through a lucky accident than by design. More recently their sound has been increasingly reigned in, safe and polished; focused on finding the next infectious hook and letting experimentation fall by the wayside. However, for a couple of glorious records, they got the equilibrium just right. Delivering massive arena anthems in a singularly eccentric style, they had a sound that was hard to pin down and yet instantly recognisable. I had worried that the band would continue to shift further away from the Goldilocks zone with their latest album A Celebration Of Endings, especially after lead single ‘Instant History’ offered up a chorus that sounded like it would be more at home on an Imagine Dragons record. Instead it manages to be both their most eclectic and their most consistent body of work in a decade.

Simon Neil certainly plays to his two biggest strengths on this record, namely being a bottomless well of killer riffs and having a knack for crafting big festival ready choruses. The former is on display right from the opening salvo of ‘North Of No South’, careening out of nowhere to hit you like a freight train, with plenty more great riffs scattered throughout the rest of the record. The latter takes a little longer to materialise, but as soon as you hit the suitably explosive hook of ‘Tiny Indoor Fireworks’ you find yourself treated to one of the band’s biggest bangers to date.

There is one aspect of their records that has always been a little unsteady however. It’s no secret I’ve had a love hate relationship with Simon’s lyrics over the years; he’s produced more than a few tattoo worthy lines, but previous records have hosted at least one line so stupid that it must have come from a random word generator. Miraculously Celebration never crosses the line into the ridiculous and still delivers its fair share of poignant moments. Most notably on the gorgeous romantic ballad ‘Space’, with such killer lines as “We carried our past and cradled the storm, We tried to conceal the scars we wore” and “Love’s truest meaning lives when you’re not there”.

In spite of all this it’s perhaps the Johnston twins who shine most on this record. There’s more bite in the rhythm section here than I’ve heard from the band in a long time. James’ gut punch bass lines on ‘Weird Leisure’ and ‘End Of’ elevate the tracks to new heights, while Ben’s frenetic staccato drum work on ‘The Pink Limit’ show a glimpse of the band’s more progressive side. Biffy have always had a prog streak running through them, but I don’t think it’s ever sounded better, or been more prominent, than on closing track ‘Cop Syrup’. At it’s centre lies a rich textured atmosphere; a gorgeous swirling ocean of sound, steeped in melancholy, that could have been plucked straight from a Porcupine Tree record. This unexpected delight truly ends the record on a high.

The fact that their most proggy and ethereal work to date is sandwiched between a ferocious punk intro and outro, and yet somehow still works, is a perfect analogy for the album as a whole. In amongst gargantuan riffs you have the straight up pop of ‘Instant History’ and the acoustic balladry of ‘Opaque’ feeling like a spiritual successor to Puzzle‘s ‘Machines’. A Celebration Of Endings sees Biffy Clyro being pulled in a myriad different directions, but it never feels at risk of coming apart as they manage to hit the mark with every endeavour. It’s not quite their best album, but it’s in closer contention than I ever would have expected.