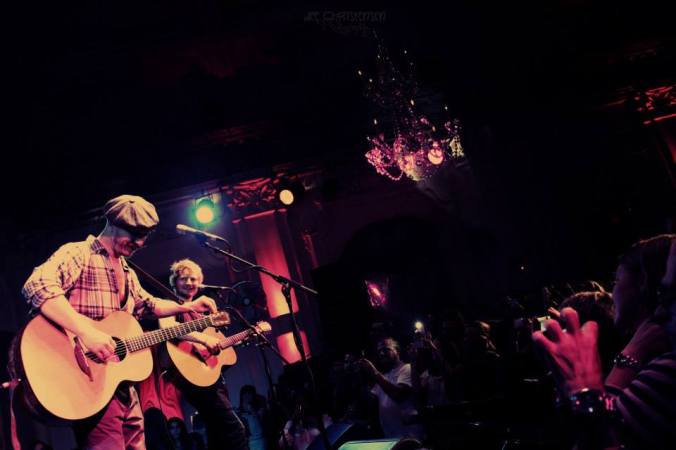 If you’d have asked me who I most wanted to see live, after much deliberation I would probably have said Foy Vance. He is a Northern Irish song-smith with a golden voice and a heart to match. He sings with the grit of Bruce Springsteen, the soul of Otis Redding and the passion of Van Morrison. So imagine my excitement at getting a ticket to a gig billed as an ‘intimate evening’ with the man himself.

Intimate is the key word here; I’ve seen bigger stages at school plays and a piano sat in front of it jutting out awkwardly into the audience. The crowd gathered around it and Foy did not keep us waiting, nor did he disappoint. Working his way through the mass of people with a smile and a wave he sat just a couple of feet away and captivated us with a powerful rendition of ‘Regarding Your Lover’. You could feel the electricity in the air, and that kind of set the mood for the evening. He would make your hair stand on end with the intensity of ‘Like An Animal’ or tug at your heartstrings with the haunting ‘Indiscriminate Act of Kindness’ and then disarm the mood with a witty quip and a rousing sing-a-long. Every song got an ovation, every song had the couple of hundred or so people in the audience singing back to him.

After a very brief intermission, Foy was joined onstage by his biggest fan. No, sadly it was not me, but Ed Sheeran! Having heard mention that he was in attendance I was expecting him to make an appearance to sing ‘Guiding Light’, their collaborative song from Foy’s album ‘Joy of Nothing’, but we were treated to so much more. A kind of medley game started where Ed would start playing a song of Foy’s and just when the two of them were in full swing he would change the song again. The highlight of the night was certainly their incredible cover of Hendrix’s ‘Crosstown Traffic’. After breaking a string midway through from his percussive guitar playing, Ed resorted to beat boxing and sat back and let the main man do what he does best.

Having gone rather over curfew with a vast varied setlist including Foy’s bigger hits, some deeper cuts that I don’t think have seen light in a while, some excellent covers (including more Hendrix and some Bruno Mars) as well as brand new songs that I hope I get chance to hear again some day, the night was over. Eventually. After about ten minutes of everyone still singing along after he had left. And some probably still singing ten hours afterwards when they’re back at home and thinking about what an amazing night it was. If you asked me now who I most want to see live I would whole-heartedly, unabashedly say Foy Vance. He’s no big name star, but he certainly deserves to be.