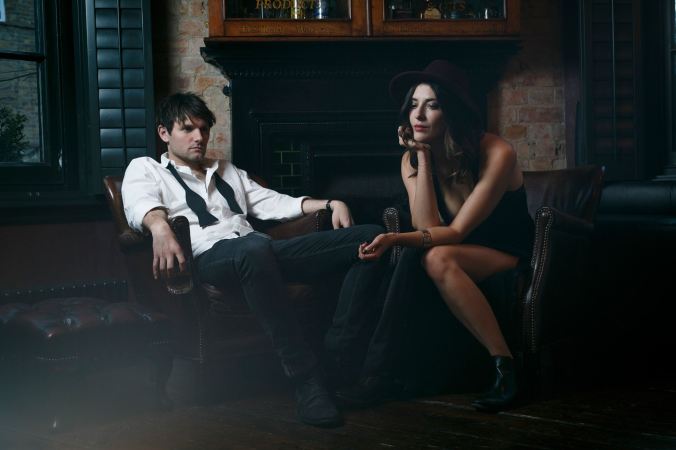 It’s always a delight to see artists that you admire grow and achieve great things. Sheffield based duo Ophelia have quickly become firm Belwood favourites, and their eagerly anticipated debut has set the year off in fine form and is sure to stand as one of the most memorable releases of 2018. Heartwarming Americana, folk as delicate as some flickering candle flame, and haunting gothic rock are all to be found within Blackbox Memories. I’ve been looking forward to interviewing Ophelia for some time now, and it struck me as the perfect opportunity to delve deeper into their new record:

Thanks for your time! So glad that you’re finally sharing your debut album Blackbox Memories with the world! Are you proud of how it turned out?
Rebecca Van Cleave: Very much so. It’s been almost 2 years since we actually recorded it, so we’re both really excited to finally release it into the world.
Samuel Taylor: Feeling very proud of how it turned out. In the two years since we formed Ophelia we’ve managed to head out on tours in Europe and the States, as well as record and release our debut album, so it feels pretty good. A perfect start to the story…

What was your favourite song on the album to record?
S: I think one of my favourites to record was the title track itself ‘Blackbox Memories’. It was quite an easy track to record, it came together very naturally and had it’s own very distinctive sound straight away. I love the percussive roots elements mixed with the raw electric guitar, etherial vocals and soundscape.
R: For me it was probably ‘If You Could Read My Mind.’ We recorded the vocals on one of the last days in Tesla Studios so we were quite comfortable and immersed in the album by that point. Greg and Glover set up two vocal mics facing each other, so we could record it like we perform it life. It was sexy, vibey.

I imagine being a transatlantic partnership has its ups and downs, but what influence do you feel the two vastly different backgrounds and upbringings coming together has had on your music?
R: Funnily enough, given our locations growing up, our backgrounds aren’t as different as you might think. I was born over here and my mum’s English, so I think certain parts of me have always felt more ‘British’ than ‘American.’ Moving back to London in 2012, strangely felt like coming home. And even though we definitely had our different bands growing up, especially in adolescence (I was well into the pop punk scene, while Sam was more into the indie Oasis kind of bands), at our core we were lucky enough to be influenced by a lot of the same music (Beatles, Stones, Dylan, Ryan Adams, Cranberries, etc), which I think translates into a really solid sound in our music, but with some exciting unexpected twists and turns.
S: What she said.

How would you describe each other as songwriters?
S: I always feel that Rebecca has a beautiful honesty in her songwriting. She writes lyrics with her heart on her sleeve, which is so refreshing to hear. She doesn’t hide behind anything, and for a man who often writes in metaphors I can tell you that takes a lot of courage. Her melodies are also wonderfully her own; They meander and flow and follow the natural pulse of the words on a journey through each story she tells. It’s an honour to work with her as an artist and a songwriter.
R: Sam’s just brilliant. His way with lyrics and words is something that I haven’t encountered before. And equally with the melodies he writes. I’ll be sitting downstairs sometimes and will hear these songs coming out of our attic and will think he’s just practicing covers, but he’s just writing it on the spot. I feel like we need to have a tape recorder just constantly on up there. Haha. And as a collaborator, I couldn’t ask for a better songwriting partner. I’m not the most gifted instrument wise yet, but when I’m writing I’ll hear all the parts in my head and somehow, somehow Sam manages to translate my vague humming mumblings into exactly what I had imagined. It’s pretty incredible to witness.

Much of the album carries that classic Americana “road trip” feel. I know you had quite the adventure in the music video for ‘A Little Too Late’, but how would you describe your perfect road trip? What would be your car of choice and what would you choose as the soundtrack?
R: Oh wow, that’s such a good question. Well, we did a road trip down the Pacific Highway Coast of California a couple Januaries ago and for me that has always been the holy grail of road trips that I’d love to repeat again as soon as possible. We were in a KIA last time, but if I’m allowed to dream we’d have some kind of cool old convertible or an old VW that we could just camp out in on the beaches. Soundtrack wise… we’ve made some pretty epic road trip playlists on Spotify, but I think the journey would probably start out with Rusted Root’s ‘Send Me On My Way’… never fails to put a smile on my face.
S: I want Bruce Springsteen, Tom Petty, CCR and The Gaslight Anthem on my stereo whilst I’m driving a classic old Ford pickup, much like the one in the video, I felt at home in that. Either the pickup or put me on an old Triumph motorcycle, that could be fun too…
R: Yeah, I’d be happy on the back of a motorcycle too…

For me the two tracks that really stand out on the record are ‘If You Could Read My Mind’ and ‘I Can’t Dream About You Anymore’. They move away from the heartwarming Americana sound and instead explore a much darker, almost gothic vibe. What inspired these tracks, and is it a sound you see yourselves developing further in the future?
R: Sam wrote both those tracks so I’ll leave him to answer that question, but as far as a future sound goes, I think we like to leave ourselves open to all possibilities. This modern idea that a band has to fit in a genre specific box drives me a bit mad to be honest. When I look at some of my favourite artists, they’ve all taken risks and haven’t been afraid to write different songs in different genres, even on the same album. I think that’s something that you don’t find as much of these days and why people might call our sound ‘diverse’ or ‘undefined’ but it’s something I’m keen to continue as Ophelia moves forward. We already have our next two albums mapped out and they’re completely different to each other. So yes, we’ll go dark, but they’ll be some light in there too.
S: In terms of inspiration for those tracks, all I can say is one was written when I had the flu whilst looking out over a cold grey city and the other on a deserted farm on the outskirts of Nashville as heavy rain fell down one cold march day. I guess you’ve got to keep me somewhere cold and grey if you want the sad songs.

What is the most cherished memory or memento that you keep in your own “black box”?
R: The idea behind the song Blackbox Memories was those memories that are permanently etched in the core of your being. You may forget you have them and then years later they’ll appear. Sights, sounds, smells, putting on yellow socks at the top of the stairs when you were 2 years old… these random things that stay with you throughout your life.
If I had to answer that question (and not to sound totally cheesy) but I guess my most cherished one would be meeting Sam at The Slaughtered Lamb in London on May 17th, 2014. It’s definitely been the event that altered my world the most, so I reckon that’s a keeper.
S: Well I can’t follow that can I? Haha. Maybe I’ll give you a memento answer. I have a suitcase of diaries, photos and a few little childhood trinkets, but I’m a pretty private person so I’ll keep the details of my box a secret for now.

Following on from Blackbox Memories, what does the rest of 2018 have in store for you?
S: Well we’ll be getting out there and promoting the record at first, we have release shows with the full band in Sheffield, Leeds and London, and we can’t wait for that. Once the album push is over we’ll be heading into the studio to start on album number 2.
R: A lot of writing and recording definitely one, if not two new albums. We’re excited to start working on new material as we have so much that we’ve been sitting on these past couple years waiting for Blackbox to be released.
And then outside of the band, Sam’s doing some solo stuff, I’m doing some films, hopefully a few road trips… oh and there’s a little wedding in August too.

Massive thanks to the ever wonderful Ophelia. Their debut album Blackbox Memories is out 26th January and is not to be missed!