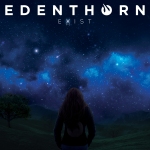 With their new album Exist, Durham quartet Edenthorn showcase all the elements necessary for them to become one of the country’s next big alt rock bands. Opening track ‘Out of the Dark’ bursts out of the blocks with its blistering riffs before settling into the stupendously slick melodic vocals.  Here, as on tracks like lead single ‘Mind Like A Minefield‘, the band touch on the subject of mental health and hint at a greater depth and lyrical ability. Both in the vocals, and in the softer guitar sections, its clear that the band have a masterful command of melody. Sadly there are a few filler tracks where the band feel like they’re playing it safe, and the intro to ‘Live In The Now’ feels a tad cringe-worthy.

While for a time Exist feels a bit like paint by numbers alt rock, on the last three tracks they really start to stray outside the lines and explore their own creativity. ‘Where Did You Go?’ sees them at their most bright and accessible, while ‘Garden of Heaven’ boasts some interesting drum fills and bass runs leading into a superb spiralling guitar solo. It’s on closing track ‘Speak to Me’ however where everything falls into place and they begin to sound on a world-class level. The wonderfully expressive rhythm section provide the perfect backdrop as the guitar just ascends to a higher plane, sounding like some epic fusion between Pearl Jam and Pink Floyd. With this glimpse of what Edenthorn are truly capable of I know that the potential for greatness lies just beneath the surface, and I look forward to seeing it emerge on future releases.