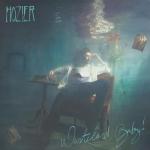 Good things take time; a mantra that often gets forgotten these days. Life moves so fast that there’s a greater emphasis on being in the public eye to remain ‘relevant’. To this end, so many albums end up getting rushed out before they’re really ready to be shared with the world, and fall short of the mark because of it. Hozier clearly understands the virtues of patience, and has produced a follow-up to his stellar debut that is worth the long wait.

Overall it feels a far more relaxed and playful affair than his debut, certainly helped by such wickedly memorable one-liners like “I’d be appalled if I saw you ever try to be a saint, I wouldn’t fall for someone I thought couldn’t misbehave” on ‘Nobody’. The spirited love letter to jazz in ‘Almost (Sweet Music)’ radiates heartwarming energy, while ‘Movement’ allows for his astonishingly soulful vocals to truly shine as the track builds to a powerful climax. The fuzzy guitar tone on ‘No Plan’ seductively snakes its way around this captivating R&B number, easily the album’s biggest grower, slowly working its way into your affections and eventually emerging as one of the standout tracks.

While there’s plenty of fun to be found in the record’s most upbeat output, there’s still plenty of darkness to be found too, particularly in the more stripped back folk offerings. ‘As It Was’ in particular may be his best folk track yet. There’s something ancient and sinister lurking within the atmosphere it weaves, and in his vocals flitting between soft-spoken omens and sorrowful soul, that just casts a spell over you. ‘Shrike’ holds none of that otherworldliness in its bright melodies, but there’s still a touch of the gallows in its rich avian imagery. It’s easy to focus on Hozier’s godlike vocals, but on this record he really comes into his own as a singular songwriter. He has a real way with words, a thoughtful and unique perspective that I find defies comparison.

Wasteland, Baby! may have much of the same strengths as the eponymous debut, but it also shares some of its flaws. While the production is much improved, once again the album is too long and has its share of filler tracks. ‘To Noise Making (Sing)’ and ‘Sunlight’ are overly repetitive and the vocal effects on the title track are wholly unnecessary and ruin what would otherwise be a great song. Overall the extra time and effort paid to this album really shows though, and it’s a perfect example of a second album done right. Thought it will pain me to wait years longer for number three, based on this I know it will be worth every second.