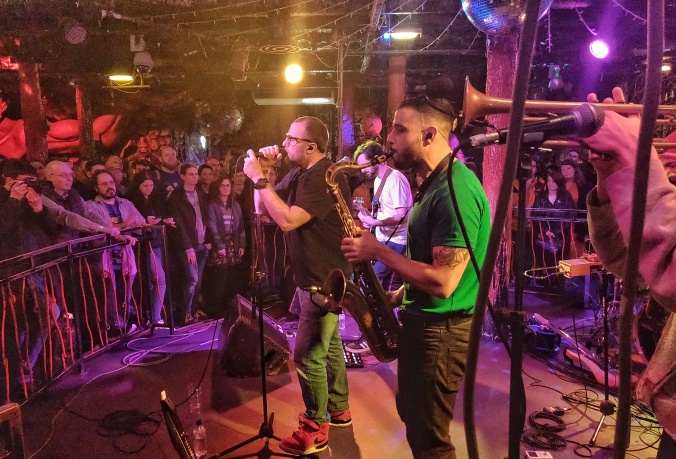 One of the most frustrating first world problems that comes with running a music blog, especially one covering new acts and niche genres, is discovering incredible bands and artists from across the globe that you may never get to see live. I was worried that Thank You Scientist would be in that category for a good long while yet; a real blow as, being the most exciting prog act around and our 2019 album of the year winners, they were also near the top of my list of bands I most wanted to see. In a stunning stroke of good fortune however, TYS decided to embark on a UK tour. Despite everything from stormy weather to closed rail links battling to keep me away, I was determined that this was one show I was not gonna miss!

Getting to the gig early doors, I was having a great night before even a single note was played, as I found my new favourite venue in Satan’s Hollow. True to its name the whole place is decked out like a haunted house. Gothic stained glass windows lit up along one wall, a giant devil statue looming in the corner, and grotesque faces jutting out from half melted pillars. The merch stand was tucked away in a graveyard and the bands performed in the round at the centre of it all, as though the crowd were cultists that conjured them into existence within a summoning circle.

Opening act Lost In Lavender Town certainly weren’t a horror story, but nor will I be becoming a cult follower anytime soon either. The instrumental outfit fluctuated between moments of complexity and nuance and impenetrable walls of sound that were deeply lacking in musicality. Just when I started being drawn in by the former I found myself being put off by the latter. The jury is still out on these guys. The second act of the night however, Exploring Birdsong, have definitely found themselves a new fan. Their piano driven progressive pop had a few hints of Iamthemorning, but the stellar rhythm section ensured they had their own unique flair. I was impressed to hear such a rich and complex sound coming from such simple set-up (by prog standards that is). The powerhouse lead vocals were absolutely stunning, as were the harmonies with the backing singers. These rising stars really brought something heavenly to Satan’s Hollow.

While the opener strived to create a big sound from a small set-up, Thank You Scientist went in completely the other direction. Naturally they have a reputation for intricacy and absurdity, but I still found great amusement in the fact that their set-up included a theremin, a fretless guitar and an electronic wind instrument. I can only imagine the bemused look their local music store owner had when he saw their shopping list. Even with such hilarious levels of prog excess though they never once bordered on pretentious. It was a night of balls to the wall fun. The grooves were slick and irresistible and got the whole room moving, and the crowd were singing their anthemic hooks back to them at the top of their lungs. The saxophonist and trumpeter were the life of the party, dancing around and racing laps around the stage all night.

Everything that makes the band great was dialled up a notch in this fabulous live setting; the astounding technicality, the effortlessly infectious grooves, and the band’s abounding absurdity and sense of fun. Even ‘Chromology’, the track I had down as the least engaging from Terraformer, took on new life as each band member played a blistering solo. The setlist was spot on, with all the highlights of the new record like ‘FXMLDR’ and ‘Anchor’ with it’s incredible violin solo. You had the stunningly soulful fan-favourite ‘Mr Invisible’, their marvellously madcap cover of Eddie Murphy’s ‘Party All The Time’, and closing with the boundless energy of ‘My Famed Disappearing Act’ with its fitting chorus of “We’ll miss you everyone, It sure was fun, the times we all had”.

Though Thank You Scientist were everything I’d hoped they’d be, there were a few niggling issues keeping the night from making my list of best ever gigs. Sal’s vocals were a bit too quiet in the mix during the first half of the set, and I don’t think any of the bands were really prepared for performing in the round (though TYS did a fair job of adapting as the night went on), so there was a fair chunk of the audience that spent much of the night looking at people’s backs. All that said, when it comes to my list of most unique and memorable sets I’ve seen, this is straight in at number one and will surely hold the title for a long while yet. I can even begin to imagine a gig so brilliantly batshit as to top it.